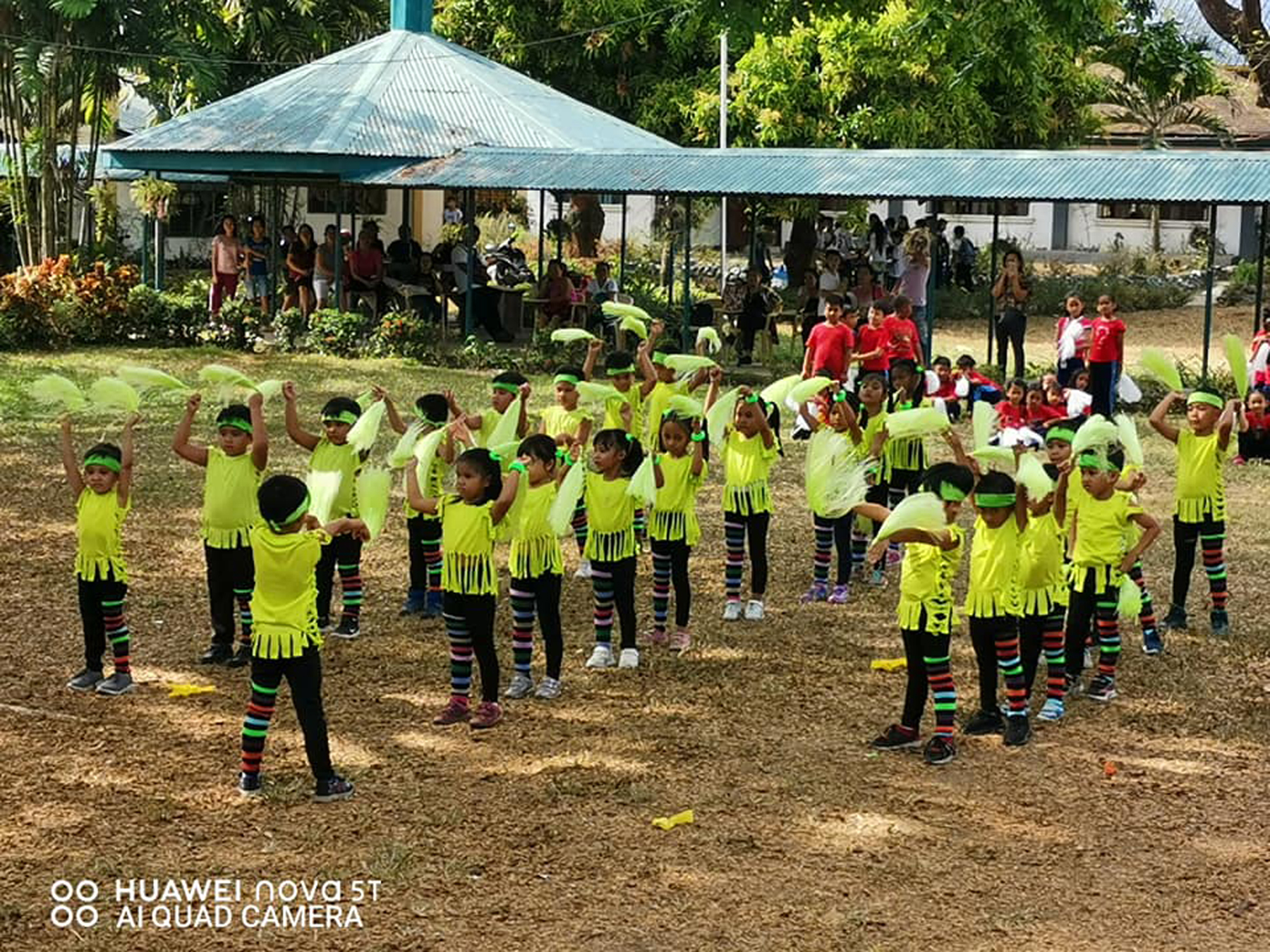 In lieu of the regular and yearly field demonstrations during Foundation Day is this year’s P. E. (Physical Education) and the Cheering Squad Night by the college students to be held tonight at the David & Ruth Pulido Pavilion. That is, all P. E. classes will perform marching and drill while the different departments in the college will perform a cheering squad.

However, earlier this afternoon, the elementary department as whole had it ahead also their P. E. Day as performed by each level from Kindergarten to grade 6 in the college lawn at the back.

On Thursday night at the David & Ruth Pulido Pavilion, the so-called P. E. (Physical Education) Night was held which required two separate performances in forms of marching and drill by all P. E. classes and the cheering squad by the different departments in the college which are the Department of Business Education (DBE), Department of Information Technology, School of Arts & Sciences (SAS) and a separate presentation of the Psychology department under SAS, School of Nursing, and School of Teacher Education (STE).

A musical offering “How Great Thou Art” was held Friday vesper service at Aguinaldo Balinao Hall on February 28, 2020. The said musical and religious concert featured all official singing groups of NLAC which are the following: College Chorale (CC), also known as NLAC Chorale as conducted by Mr. Dorvin Camba and the official pianist himself; Remnant Square Chorale (RSC) under Pastor Adelbert & Mrs. Felicidad Rosana; STARS (Students Team Aiming to Revive Souls) with Mrs. Charity Dotimas as the conductress and Mrs. Vicelyn Joy Donato as the official pianist; Young Harmonic Heralds (YHH) under the sponsorship of Mr. Jan Paulo Santos and Ms. Joycelyn Villavicencio, also the conductress of the group; the Prymbassadors which is the official singing group of the academy under the directorship of Mr. Jomar Bacani; and the Amadeus group led just the same by Mr. J. Bacani, academy Science/Math teacher.

Other musical renditions included the instrumental offering and accompaniment by the NLAC Symphony, and the finale song by the mass choir, oftentimes called the mixed choir that comprises all the official singing groups.

A special part of the program was the giving of two separate testimonies by Romel Mag-isa, a senior high school student under the HUMSS (Humanities & Social Sciences) strand, and by Mr. Russell Villaver, chief accountant of the college.

The said religious musical concert was coordinated by Ms. Elvie Padua with the extensive assistance of Mr. Emyl Dale Gunong, a Music graduate from Adventist University of the Philippines (AUP), and an alumnus of NLAC Academy.

Happy Sabbath Foundation Anniversary to all.